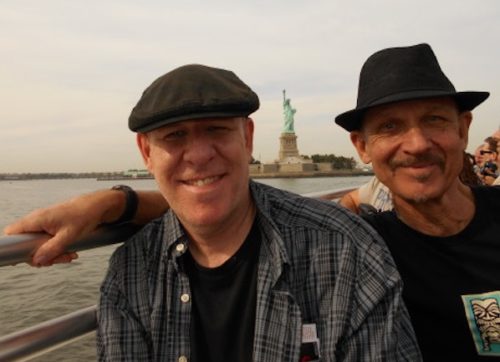 A gay man is suing the Social Security Administration after being denied spousal survivor benefits when his husband died in 2014.

Michael Ely and James Taylor of Arizona were together since 1971, when Michael was 18 and James was 20.

“My husband was the love of my life,” Michael said. “Like other committed couples, we built a life together and cared for each other in sickness and in health.”

In 2014, they got married just after Arizona’s ban on same-sex couples marrying was struck down by a court. About six months later, Taylor died of cancer.

Michael, who took care of James when he was sick, applied to get James’s Social Security benefits. They were married, James paid into Social Security his whole life, and Michael is now 65-years-old.

The only problem? The Social Security Administration requires couples to be married for nine months before they can access survivor benefits, a requirement that Michael and James were legally barred from meeting.

“Even though we’d been together for 43 years, I’m barred from receiving the same benefits as other widowers, even though my husband had worked hard for 40-plus years and paid into the social security system with every paycheck,” Michael said.

“The federal government is requiring surviving same-sex spouses like Michael to pass an impossible test to access benefits earned through a lifetime of work,” said Peter Renn of Lambda Legal, which is representing Michael in his federal lawsuit against the Social Security Administration.

“These benefits are as essential to the financial security of surviving same-sex spouses in their retirement years as they are to heterosexual surviving spouses. But the government is holding their benefits hostage and imposing impossible-to-satisfy terms for their release.”

Join a gay dating site where you can meet single guys from any town or city.
Rely instead on Gay Dating Solutions to do the work for you!
Don’t get fooled by free offers made by other sites. Gay Dating Solutions is offering a FREE 6 month promotion ABSOLUTELY no strings, request for credit card numbers, etc…it is the only site that is truly free to join!
Sign-up now: www.gaydatingsolutions.com
Download our mobile apps: https://appurl.io/jd0jaqp0
Like us on Facebook: www.facebook.com/GayDating101
Tweet us: twitter.com/GayDating101
Categories: Gay RelationshipsLGBTQNews
Tags: Gay WidowerLGBTQSocial SecuritySpousal Benefits

They Were Together 43 Years but Social Security Won’t Let This Gay Widower Claim Spousal Benefits – Real Gay dating · November 22, 2018 at 9:06 am

7 Steps to Find Unconditional Love in 2021

If you’ve been asking yourself, “Will I find love?,” know that it’s a normal question, especially if you feel a lack of affection or companionship in your life. Learning how to find unconditional love, however, is Read more…

‘I’m a Homophobe and My Son is Gay’: Dad’s Emotional Reddit Confession

Should You Spend Thanksgiving with Your New Boyfriend? Dating Advice for Your First Thanksgiving as a Couple.

With the holidays right around the corner, lots of couples are considering taking the opportunity to meet each other’s families…

NUDE IS THE NEW BLACK Gay men everywhere are cursing their bodies as a matter of form. It’s become normal to…